14 October 2022
The vinyl format of "What's Yours And Mine" is available in Singapore at B Side Records (4A Haji Lane), Vertigo 26 (26 Seah Street), The Panic Room (311A Geylang Lorong 17) and The Analog Vault Esplanade Mall) and Bizarro Market online store (bizzaromarket.com). CDs are available at B Side Records. In Malaysia, the vinyl and CD are available at Teenage Head Records in KL.

The Oddfellows merchandise is available from our bandcamp site.

What's Yours And Mine

The "What's Yours And Mine" album is available on vinyl and CD formats, and on streaming platforms (Spotify, Apple Music, Deezer, Tidal, etc). 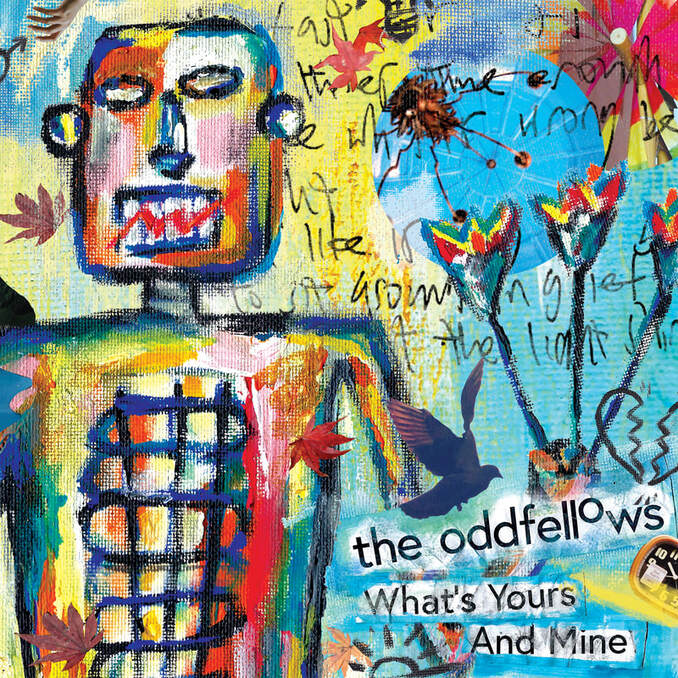 Cover design and artwork by fFurious
"What's Yours And Mine", out on 24 September 2021, is the third studio album by The Oddfellows. Their last studio album, "Carnival", was released 29 years ago, in 1992.

Since then, The Oddfellows have continued to perform and record, only taking a hiatus from 2001 till around 2007 when Johnny was studying in Taiwan. The band was recording its third album in the late 90s for Springroll label when the Asian Financial Crisis hit and the label closed its doors in Singapore. The recording with producer Shah Tahir was abandoned and the tape reels were lost. Only a few rough mixes on cassette tapes were left from the recording sessions.

The band performed at the Esplanade Outdoor Theatre in December 2020 when the authorities allowed an audience to attend live gigs. Upon Kelvin's suggestion to perform a new song at the gig, Patrick wrote "New Future", a song very much about living in the current COVID-19 pandemic period. After the well-received gigs (two sets of 45 minutes each), the band felt the time was right to record a new album.

Kelvin wrote "Silent Worlds" and showed it to the band in January 2021. The song inspired the writing of several other songs. It's also befittingly the first single off the new album.

"I've always been a fan of straight-ahead indie rock and roll with strong melodies and sweet twangy guitars. Creativity is a strange beast. One day, out of nowhere I came out with this melody that was playing in my head. So I took out my guitar and recorded it into my handphone. Around that time, I had been reading up a bit on a multi-dimensional universe, and the fact that there are realms out there we don't have any idea of. The fourth dimension, string theory and stuff like that. I wanted to write a song about not letting the virus get us down, to cut our losses, learn meaningful lessons from it, to roll with the punches, and to rise above all that. To transcend above that, if you will. I started to think of the multi-dimensions as world-like, that run into each other, while we are totally unaware of it. They were quiet, as a result. So in the chorus, borrowing from the Beach Boys, I imagined us rising above the sorrows, loss and fears of the virus, and just surfing above it all, and watching imaginary dimensions collide. From there, 'Silent Worlds' was born. I'm just very grateful the guys like it enough to record it and put it in the album," said Kelvin.

Patrick added, "After listening to the 'Silent Worlds' acoustic demo, which I loved immensely, it inspired me to write 'Restless Heart' and 'It's Not Easy', and to re-write some of the lyrics to 'Where's Your Heart?' and 'A Lullaby (For You)'. In a way, these songs are about living through the pandemic. It's hard on some people, which could lead to loneliness, isolation, helplessness and mental health issues, not to even mention the loss of jobs or livelihoods. As such, I wanted the songs to be life affirming."

On "Stronger (Song for Jacq)", the other track that Kelvin wrote, he explained what the song is about: "I have, by Singaporean standards, taken a very different route in the way I live, and the path I've taken. So, I wanted to write about how when you choose to live the creative life, you get misunderstood and rejected, and at the same time struggle to eke out a living. But I wanted it to be an uplifting song too, and that happens in the chorus. The lines in the chorus could be read literally, as a whole, to be somewhat, a modicum of insight. When you look at the 'you' in 'when you come around' as a noun, then the 'you' could also be a special someone who helped pull you through the struggling. In my case, it is Jacq, and that's why the song is dedicated to her. I wanted it to be a song that encourages people not to give up on life. It is an ode to self-belief inspite of the odds."

Vincent wrote "Lucid Dreams", a jangly guitar mid-tempo number that is reminiscent of early REM. "It's a song about life reflections during the pandemic. Most folks never stopped to smell the roses enough until lockdowns hit us. It's a reminder to count ourselves blessed, to stay positive and to live life to the fullest," said Vincent.

“I never thought that there would be a day to return to TNT studio to record a full-length album. It's our third but my first. While arranging and rehearsing the songs, it just flowed naturally - that Oddfellows sound and style from our early days to what it is today. I’m really grateful for this journey and I hope, like The Rolling Stones, to still be rocking for another good 20 years," said Johnny.

Kelvin perhaps summed it up best when he said, "The recording of 'What's Yours And Mine' has been a total joy. This album is a labour of love and a miracle to us, and I'm so grateful that through the years, we have evolved our sound and songwriting as a band, as well as our relationship with each other as friends and fellow brothers."

"What's Yours And Mine" is an album very much made for 2021. The Oddfellows want us to feel that we have the power to find positives amidst the struggles, to embrace life, and to be able to lift ourselves and others up in these challenging times. This album, this feeling, is yours and mine.
Tracklisting
​1. New Future*
2. Silent Worlds**
3. You Calm Me Down*
4. Stronger (Song For Jacq)**
5. Where's Your Heart?+
6. Restless Heart*
7. Lucid Dreams***
8. It's Not Easy*
9. The Song You Said I'd Never Write*
10. Out Of My Head+
11. A Lullaby (For You)*
Credits
*Written by Patrick Chng
**Written by Kelvin Tan
*** Written by Vincent Lee
​+Written by Patrick Chng & Kelvin Tan